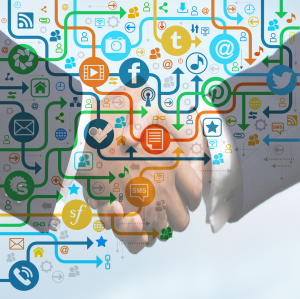 There is no question that social media has a role to play in M&A activity.  In a recent survey by Toronto based international law firm Fasken Martineau; respondents reported that they were not only using social media to communicate deals but also for research and due diligence .

There are 2 benefits of social media: (i) expert opinion, and (ii) trending sentiment.  Much of the hype behind the trends in Big Data are about connecting these 2 powerful elements with the hard numbers around corporate valuations.  For instance, an acquirer may wish balance valuations with the trending market sentiment and the opinions of experts.  An extreme example of this is the Facebook IPO where market hype vastly outweighed traditional valuations.  So much so that Warren Buffet said that he had no idea how the valuation was so high and that he just couldn’t value companies like this.  Social media is often seen as an echo chamber; a small community talking to itself.  Posts range from  self-aggrandisement to advertising puffery with very few hard facts and figures in between.  What few figures are there may be real, may be fictional or may be somewhere in between.  The value is in aggregating these figures but the algorithms needed to ensure that the right weighting is placed against the right number based on author, time etc (let alone how they account for hearsay).  the maths behind this is hard enough let alone the semantic interpretation by computers.  Needless to say, when this sort of calculating can be done it will be worthwhile for many and will be, initially, a very, very expensive service.

The moral of the story is  – BEWARE!

Social media remains useful for advertising and developing an extended network of sector contacts in order to deepen one’s contextual market knowledge.  However, as an analytical tool, to my mind, it is still out there with witchcraft.